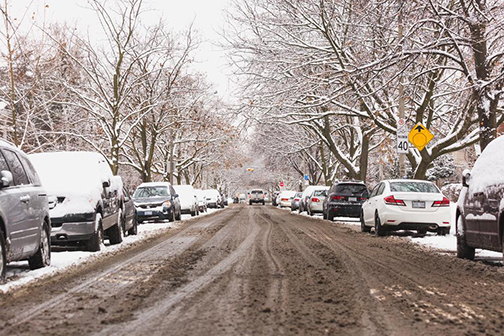 Electric and hydronic snow and ice melt systems can be a large investment but offer a cleaner, complete, uniform melt that can be easily monitored and controlled automatically or manually. With electric and hydronic melt systems, the only environmental impact is from the energy used to heat the heater cables or fluid in the heating pipes. Modern snow and ice melt controls implement energy-saving technologies that can help reduce their operating cost and environmental impact.

Electric and hydronic melt systems also can consistently heat places where chemical snow and ice deicers would be damaging or impractical, such as on roofs and in gutters.

Chemical deicers are very common. They are versatile, require no initial setup or permanent installation and can easily be regulated and modified. However, there are several drawbacks to using chemical deicers. Chemical deicers can be corrosive and can impact the environment through runoff, absorption, and air transportation.

Chloride is corrosive, meaning it can deteriorate a material by chemical reactions. Chloride does not biodegrade or absorb into material easily, so it can accumulate changing the fertility and acidity of the soil, damage plant life, and enter ground and surface water.

Sodium, magnesium, and calcium effect soil and plant life differently. Sodium changes the structure of the soil, decreasing permeability, and infiltration. Sodium also increases the alkalinity of the soil, which reduces the magnesium, calcium, and other nutrients for plant life.  Magnesium and calcium can be good for the soil and plant life by adding nutrients. Sodium reduces the hardness of water, again reducing the magnesium, calcium, and other nutrients and metals. Magnesium and calcium increase water’s hardness (increases mineral content), they can also decrease the toxicity of heavy metals in the water.

Acetate-based deicers, sometimes referred to as pet-safe deicers are less corrosive and are not as toxic to plants and wildlife than chloride-based deicers and. The most common type of acetate deicer is calcium-magnesium acetate, otherwise known as CMA. The characteristics of CMA indicate that it is mostly absorbed by soil surface, minimizing the amount that would be carried away by runoff to surface water or enter ground-water.

Since most of the acetate-based deicer runoff is absorbed by soil only a limited amount enters the water system where it’s effects can be minimized by dilution, larger moving bodies of water will be affected less than small stagnant bodies of water. When it does enter a water system in large enough concentration it increases the biological oxygen demand on rivers and lakes, creating a potential threat to aquatic life.